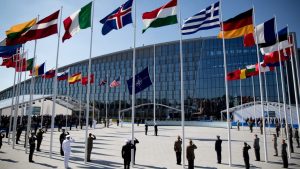 In 2009, Albania became a member of the NATO North Atlantic Treaty Organization, following the ratification of the Accession Protocol by all allied countries and the deposit of the NATO Accession Instrument to the State Department, which is also the legal holder of the Treaty of Washington. By becoming a party to this Treaty and a NATO member state, Albania fulfilled a strategic goal and a primary objective of foreign policy, advancing significantly in the pursuit of its national interests.

Albania’s NATO membership came as a result of the important decision to extend the Alliance which was decided on April 3rd of 2008 by the 26 Heads of State and Government of the Alliance during a special session of the NATO Summit in Bucharest, through which Albania and Croatia were invited to start membership talks. This decision came after the end of the 9th cycle of Albania’s Membership Action Plan (MAP) with NATO and following a series of reforms aimed at meeting the criteria for membership in the Alliance.

On April 25, 2008, Albania and Croatia officially launched NATO membership discussions. The agenda regarding these discussions included military, security and legal issues that the two countries overviewed with the Alliance experts in order to reaffirm their willingness to meet all the obligations in the future associated with full membership in the Alliance.

Through a series of bilateral meetings between NATO expert teams and Albanian teams, Albania’s interest, willingness and prospects were officially treated and confirmed to meet the political, legal and military commitments of NATO membership. The final decision of these discussions was a calendar to meet the necessary criteria and reforms within the time given.

The preparation period for membership served to intensify the efforts and strength of the Armed Forces of the Republic of Albania to deepen defense reform in all directions, accelerating the realization of priorities according to NATO standards. Thus, priority was given to completing the framework of the revised strategic base documents, such as Military Strategy, Long-term Development Plan of FARSH 2007-2020, 2008 Strategic Planning Guideline, etc.

On July 9, 2008, the 26 NATO member countries signed at the ceremony at the NATO Headquarters in Brussels with the Accession Protocols with Albania and Croatia, these legal acts that are attached to the Washington Treaty, thus making a significant institutional step for the membership of the two countries in the Atlantic Alliance.

Albania for the first time participated as a full NATO member at the Alliance Summit held in Strasbourg / Kehl on April 4, 2009. While on April 7, 2009, the official ceremony of raising the flags of Albania and Croatia to NATO took place at the Alliance Headquarters in Brussels, and a day later, the Secretary General of the Alliance held an official visit to Albania during which he received the title “Doctor Honoris Causa” from the University of Tirana.

Membership in NATO has created the opportunity to contribute, through active participation in Alliance decision-making, to the processing of issues related to Euro-Atlantic security and, consequently, national security as well. As a NATO member, Albania is in the best position to confirm its national interests and to increase national prestige and reputation. After joining NATO, Albania focused more on transforming the armed forces into a smaller, fully professional force capable of deploying and interoperable with NATO. This integration and modernization of the Armed Forces has been accompanied by the commitment to reduce ammunition depots and the destruction of a large amount of ammunition.

Also, Albania expanded its contribution to the Alliance’s efforts to maintain peace and security in Afghanistan, such as ISAF and Resolute Support Mission, after 2014. During this period, hundreds of Albanian soldiers served with high dedication and professionalism and sacrifices in some of the ISAF regional commands, best fulfilling the duties assigned by the ISAF Command. At the same time, Albania has increased its contribution to the KFOR mission led by NATO in Kosovo. It has paid special attention to supporting NATO’s cooperation with the Kosovo Security Force, as well as the political-military re-dimensioning process of KFOR’s role in Kosovo.

Even in the 21st century, the Alliance’s main objective remains coping with security challenges. Like before, the security of NATO member states is based on Article 5 of the Washington Treaty, which is also the underlying principle of the “collective defense” of the Alliance. This article,which stipulates that the attack on a NATO member state means an attack on all countries by providing collective defense. This resulted on a particular importance considering the security risks that occurred during 2014 and which were widely dealt with at the NATO Summit in Wales.

In Wales, the allied countries undertook, through the adoption of the Action Plan (PAR), the necessary steps to reinforce Euro-Atlantic security against threats from the east and south of the territory of the allied countries. In addition to supporting Ukraine through the creation of five trust funds, Allied countries reiterated their commitment to supporting Afghanistan. Likewise, they committed themselves to halt the fall in defense expenditures and their growth over a decade to 2% of GDP, and stressed the importance of strengthening the Trans-Atlantic ties.

Re-emphasizing the importance of NATO’s Open Door Policy, member states decided to open intensive talks with Montenegro in order to reach a decision by 2014 whether Montenegro would be invited to join NATO. Also, the Allies approached Georgia an expanded package of measures to help prepare for NATO membership.

At a limited time, The Euro-Atlantic security and in the face of threats and challenges coming from many directions, the Welsh commitments were re-emphasized and further extended during the Alliance’s Warsaw Summit on July 8-9, 2016. It should be noted that all the decisions taken in Warsaw have a protective and transparent nature/background and that they are not intended to increase tensions in Europe.

In Warsaw, allied countries reiterated their commitment to Wales to increase defense spending. In 2015, after a long period of decline, allied countries witnessed a slight increase in overall defense spending. Also, NATO countries committed themselves to reinforce their computer networks as part of the overall efforts of NATO countries to increase the elasticity of their responses to cyber threats. Also, NATO took over the command of the US-built anti-missile defense system in Europe to protect the allied territory against rocket threats from outside the Euro-Atlantic territory.

Allied countries also dealt with the need for more prevention at the east of the Alliance, further extending NATO’s military presence there in the spring of 2017 for the four multinational battalions in Estonia, Latvia, Lithuania and Poland. This placement constitutes a substantial, proportionate and defense contribution to the common security of NATO countries, and at the same time constitutes a clear signal that allied countries are determined to defend each other in respect of security architecture European. NATO countries also agreed that discouragement should be met with a meaningful dialogue with Russia aimed at mutual transparency and reduction of risks. NATO remains open to dialogue with Russia and estimates that the NATO-Russia Council has an important role as a forum for dialogue and information exchange, reducing tensions and increasing predictability.

Regarding the design of stability beyond the boundaries of the allied territory, Warsaw’s initiatives were adopted to start training in Iraq to build and strengthen the capacities of Iraqi military forces facing ISIL / Da’esh. Also, allied countries decided that the AWACS (Radar) aircraft from NATO will serve to provide detailed information to the International Global Coalition against ISIL-Da’esh. Allied countries agreed on a more prominent NATO role in the Central Mediterranean, further enhancing co-operation with the European Union alongside the current co-operation with the SOPHIA operation in the Aegean Sea aimed at cutting human trafficking routes. Also, it was agreed to launch a new initiative to prevent migration from North African countries – the initiative called Sea Guardian.

Since the European Union is a unique and essential partner for NATO, the Alliance and the European Union signed a joint statement in Warsaw on partnership between the two organizations aimed at intensifying cooperation in such important areas as the fight against hybrid threats and security marine. Also, NATO countries reiterated their commitment to resuming the “Resolute Support Mission” in Afghanistan beyond this year and continuing the financial contribution to Afghan forces by 2020. Allied countries reiterated their commitment to helping Ukraine to be an independent, sovereign country and firmly committed to democracy and the rule of law, and engaged in support of Georgia’s Euro-Atlantic aspirations for integration and Moldovan defense capabilities with the aim of training and resisting pressure from abroad and to push for democratic reforms.

As far as Albania is concerned, it offers in the quality of the country a proportional and substantial contribution both within the framework of the Welsh commitments and the Alliance initiatives in its northern and southern borders. Along with its engagement within the Alliance’s discouragement and prevention, Albania is paying more attention to our contribution to the Alliance’s commitment to facing challenges coming from the southern side. Thus, since 2016, Albania has contributed with naval assets to the NATO Aegean mission, a contribution that was reconfirmed for the continuation of the fall of 2017. In line with NATO’s commitments in Warsaw, where the allied determination was reaffirmed assisted Afghanistan as long as this is needed, Albania has doubled its troop convention in the “Resolute Support Mission” last year, a contribution that is expected to grow even further this year.

Summits of recent years also underlined the importance of the Alliance’s commitment to strengthening partnerships and enhancing security capabilities in Middle East and North African countries.

At the Brussels summit in May last year, NATO officially became a member of the Global Coalition for the destruction of the so-called Islamic state, thus increasing its chances of contributing substantially to this crucial challenge. Our country, in its capacity as an ally and participant in the Global Coalition for the fight against Terrorism, in addition to its concrete contribution to this Coalition, has taken concrete steps to set up an Excellency Center for fighting the phenomenon of Foreign Terrorist Fighters.

Last but not least, one of our objectives at the recent NATO Summit has been promoting “Open Door Policy” confirming our support for Montenegro’s membership, which in June 2017 became the country’s 29 NATO ally, encouraging other neighboring aspirants aspiring to membership, as well as increased NATO attention in the Western Balkans, including in Kosovo, with the goal of eliminating gray spots from the region and consolidating peace and security there.